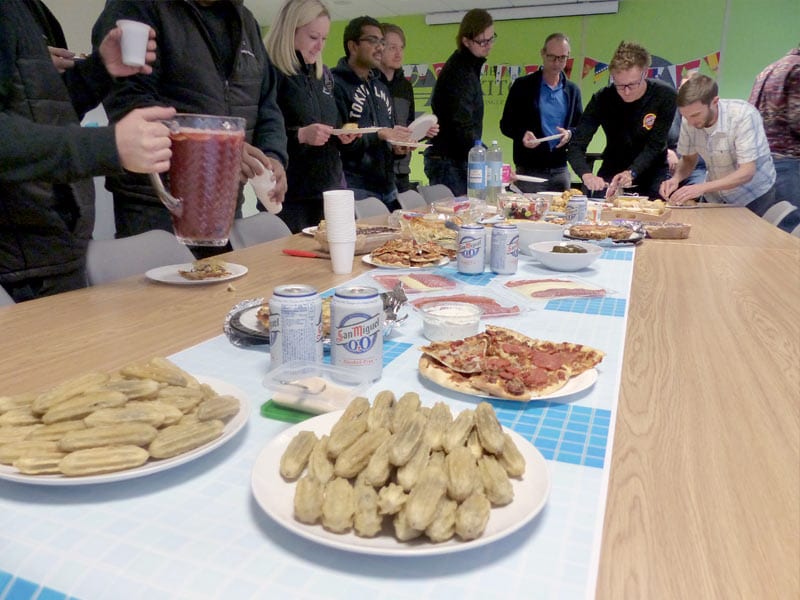 On Friday, we all gathered in our kitchen for World Food Day Parte Dos. Hosted by the design team this time, they put on an impressive spread, with a Mediterranean theme.

And not only was it Mediterranean themed fayre, but it was home-cooked too. A few of the team brought recipes from their home countries for us all to taste.

We had Spanish Tortillas cooked by Paul A, whilst Laura served up delicious Spanish pies, one with chicken and the other with tuna. Ever the healthy bunch, we had a traditional Portuguese salad created by Patrick and a Greek salad made by Piotr. Then lingering on the less healthy but rather moreish were cheesecakes made by Vim, and churros from Adam. Ali home-baked some marvellous Mediterranean scones, whilst George provided hummus, tzatziki and pitta breads. Tina served up some non-alcoholic Sangria and pizza. And of course, we had plenty of cold meats, olives and breads to spread around.

It wasn’t just about the food, as we had some nice little touches too. There was a mosaic table runner, some European flags draped around the room, and we were treated to some traditional Mediterranean background music to get us in the Mediterranean mood.

And this was all for charity, as we continue to raise funds for Rose Road Association.

Find out more about our first World Food Day.